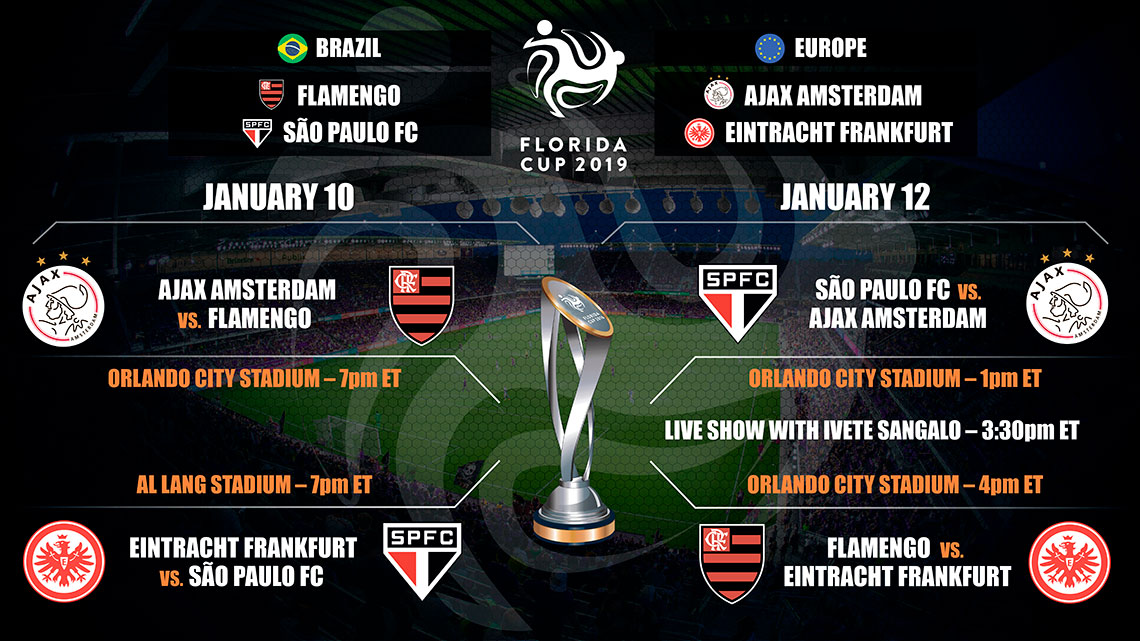 On Saturday, Jan. 12, Orlando City Stadium will host the finals in a spectacular double header: Sao Paulo against Ajax at 1 p.m. ET, and Flamengo against Eintracht Frankfurt at 4 p.m. ET. The day will also feature a performance by international superstar Ivete Sangalo and special guest at 3:30 p.m. ET, after the first match.

“The competition will feature high class international match ups and entertainment for families and fans of all ages,” said Florida Cup CEO Ricardo Villar. “This year’s tournament will come down to the final match at Orlando City Stadium, where we will crown the 2019 Florida Cup Champion. We are looking forward to all the events this year, including those at Universal Orlando Resort like the Florida Cup Fan Fest and more.”

“We at Orlando City have always been commitment to help promote professional soccer events,” said Orlando City CEO Alex Leitao. “By hosting the Florida Cup once again at our stadium, Orlando soccer fans will have another opportunity to experience the world’s biggest sport and visit our wonderful home – one of the best atmospheres for professional soccer in North America.”

Maintaining the unique international match ups focus, clubs will be separated in two groups: Brazil and Europe. Clubs from each group will face each other in a pair of games and the champion will be determined by aggregate points. Each team will receive three (3) points for a win. Games that end in a tie after regulation will go directly to penalty kicks to determine a winner. A team will receive (1) point for a tie, and one (1) extra point will be awarded to the winner of penalty kicks. The first tiebreaker in the standings, should one be needed, will be number of wins, followed by goal differential, head-to-head result, most goals scored and fair play as defined by FIFA regulations.

The Eagles of Eintracht Frankfurt are a founding member of the Bundesliga and are the holding 2018 German Cup Champions after defeating 2018 Bundesliga Champions Bayern Munich. The Europa League qualifying team features seven players who participated in the 2018 FIFA World Cup including Croatian finalist Ante Rebic, Mexican icons Carlos Salcedo and Marco Fabian and Japan’s Makoto Hasebe.

Ajax Amsterdam is the most successful club in Netherlands history, with 33 Eredivisie titles and 18 KNVB Cups. As one of the most successful clubs in the world, including the daunting task of achieving the continental treble by winning the Eredivisie, KNVB Cup, and the European Cup in 1972. It also won the first organized UEFA Super Cup in 1972 against Glasgow Rangers (played in 1973). Ajax's raised the 1995 Champions League cup, defeating AC Milan in the final, before nearly repeating in the 1996 Champions League final on penalties to Juventus.

One of the biggest, most storied and successful clubs in South America, Flamengo has won one Copa Libertadores, one Copa Intercontinental, six Brazilian Serie A titles and three Brazil Cup championships. As one of the most popular clubs in Brazil with idols such as Zico and Romario amongst its ranks, Flamengo boasts a fan base of more than 40 million supporters around the world.

About The Florida Cup:

The Florida Cup is the largest international soccer celebration held annually in Florida. It is a global platform that combines sports and entertainment, with TV audience reaching more than 25 million in the past two editions. Globally recognized soccer clubs from Europe and Latin America will convene in Central Florida for this premier tournament – a final tune-up before the start of their respective campaigns. For more information on the Florida Cup, visit www.floridacup.com, or follow us on Facebook, Twitter and Instagram.