ORLANDO, FL – September 4, 2018 – Florida Cup officials confirmed the remaining two clubs that will join Sao Paulo FC and Ajax in the 2019 edition of the Sunshine State’s largest annual celebration of international football and entertainment. Brazilian powerhouse side Clube de Regatas do Flamengo, simply known as Flamengo, will make their Florida Cup debut alongside 2018 German Cup Champions Eintracht Frankfurt in January. The 2019 edition of the Florida Cup will take place Jan. 6 – 13, 2019. 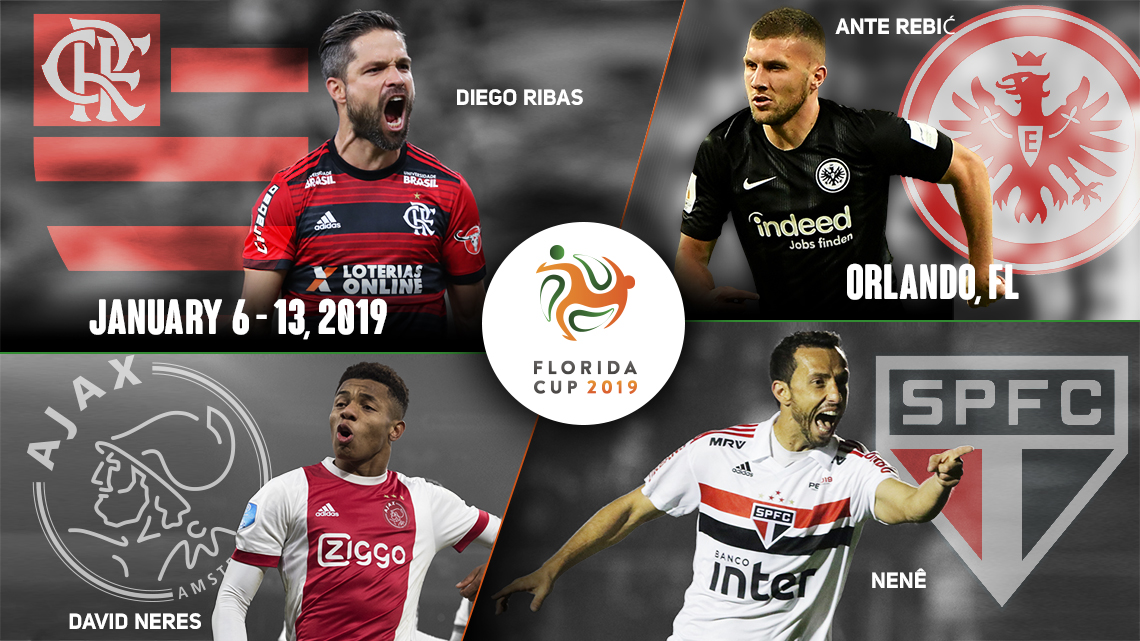 One of the biggest, most storied and successful clubs in South America, Flamengo has won one Copa Libertadores, one Copa Intercontinental, six Brazilian Serie A titles and three Brazil Cup championships. The most popular club in Brazil with former idols such as Zico and Romario, Flamengo boasts a fan base of more than 40 million supporters around the world.

Eintracht Frankfurt, or the Eagles, is a founding member of the Bundesliga and most recently, was crowned 2018 German Cup Champion after defeating 2018 Bundesliga Champions Bayern Munich in the final. The team, who qualified for this year’s Europa League, features players from around the world, including seven players who participated in the 2018 FIFA World Cup like Croatian finalist Ante Rebic.

“Our fifth edition is the most competitive and exciting Florida Cup yet. Fans will be able to enjoy top quality international football and many other attractions at the Universal Orlando Resort theme parks in a week full of entertainment for fans of all ages,” said Florida Cup CEO Ricardo Villar.

"Bringing Flamengo abroad will open the doors to make us stronger and more competitive in relation to the richest clubs in the planet. Let's take our supporters, Rio de Janeiro and Brazil to the country where soccer has the most opportunity for development. We want to be the largest nation of fans in the world and the Florida Cup is a huge step towards this process of internationalizing our brand. It will be the opportunity to show the strength of our fanbase in Orlando to the world," said Bruno Spindel, Flamengo’s CEO.

Eintracht Frankfurt Executive Board Member Fredi Bobic said, “We are taking one more step toward our goal of traveling each year to the USA until the World Cup 2026. Having the chance to compete against such strong clubs is an opportunity that we wanted to take in order to prepare for the second half of the Bundesliga season. The media reach for the event itself also plays an important role in strengthening our presence in the USA.”

About The Florida Cup:

The Florida Cup is the largest international soccer celebration held annually in Florida. It is a global platform that combines sports and entertainment, with TV audience reaching more than 25 million in the past two editions. Globally recognized soccer clubs from Europe and Latin America will convene in Central Florida for this premier tournament – a final tune-up before the start of their respective campaigns. For more information on the Florida Cup, visit www.floridacup.com, or follow us on Facebook, Twitter and Instagram.